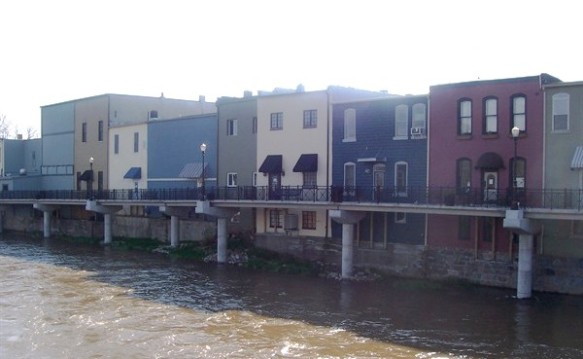 Earlier, PHAHPA posted an alert from the Michigan Historic Preservation Network, asking those of us who favor historic preservation in Michigan to write our representatives, voicing our opposition to House Bill 5232 and its senate twin SB 720.  The house bill had gone to the Local Governments Committee, where a substitute bill was adopted (on February 24th).  In the meantime, the representative who introduced the original bill, Afendoulis, wrote a substitute bill as well; it was not introduced to the Local Governments Committee before they went on spring break (which lasts until April 11th), however.  While some of the changes in the substitute bills make the proposed changes to the original historic district law (PA 169 of 1970) less severe, they would nevertheless weaken that law and are simply unnecessary.  Why this is even an issue is quite disturbing, and can be read about in Affluent Suburb Behind Push to Dismantle Michigan Historic Districts.

This is what our tax dollars are spent on in Lansing . . .to make our local communities less self-governing.

“The beauty of this system is that its a democracy,” Ligibel says. “Because it’s so local, each community decides for itself, and things change over time.”  Burg 3/9/16

MHPN has suggested that we contact the Local Governments Committee’s clerk via email with our comments and concerns during the legislative recess.   Mary Lou Terrien can be emailed at mterrie@house.mi.gov.  For more information, see the MHPN Advocacy Alerts page.  To help understand the proposed bills and their adverse affects on local historic and community preservation efforts, and to help with advocacy communications, here’s the text of MHPN’s Historic Resources in Michigan Jeopardized by HB 5232:

“Michigan’s historic places drive economic development, attract businesses, draw tourists and new residents, create a sense of place, and enhance our quality of life. Keeping these historic places is so important that historic preservation has been upheld as a public purpose under the U. S. Constitution—preserving historic resources is a valid governmental goal and local historic district ordinances have been upheld as an appropriate means to secure that goal. Local historic districts are the only way for communities to manage and protect their historic assets, and Michigan enables local historic districts through Public Act 169 of 1970. 78 communities to date have chosen to enact ordinances to protect their historic assets at the local level, under current state law. House Bill 5232 seeks to drastically change Public Act 169, making it exponentially more difficult for a community to navigate the local historic district process by introducing multiple procedures for local legislative bodies and community members to follow depending on what they wish to accomplish.”

This bill would require in establishing a local historic district that a local unit of government determine the boundaries of a proposed district prior to appointing a study committee. Currently, the study committee is appointed to complete research on the area, which assists in determining appropriate boundaries. The bill also proposes to have the entire process start over if boundaries are later changed—noticing affected property owners again and reappointing a study committee. This is inefficient and unnecessary. Property owners currently have a voice in the process through meetings and public hearings and a local legislative body typically will not vote in favor of a district if there is not broad community support.

This bill would introduce a protest petition procedure into the historic district designation process. This new process would make it onerous for local legislative bodies to protect historic resources in an area where there is a single resource under study or there are only a few property owners and they oppose designation. This amendment would allow opposed owners of at least 20% of the total land area in the proposed district to submit a petition. That petition would require that if elected officials want to establish the district, they’ll have to do so with a 2/3 majority instead of a simple majority. Besides adding additional procedures to the designation process, the proposed process gives owners of large land areas outsized influence, allowing them to make it difficult for an area to be protected, even if the proposed designation has broad support in the community.

This bill would reduce reliance on accepted, best-practice Standards used nationwide for historic district commission decision-making, introducing uncertainty into the process. The Secretary of the Interior’s Standards for Rehabilitation that commissions currently use across the state would be optional, jeopardizing how federal rehabilitation tax credit projects could be successfully completed and potentially impacting the ability of Certified Local Government communities to receive state grant funds.”