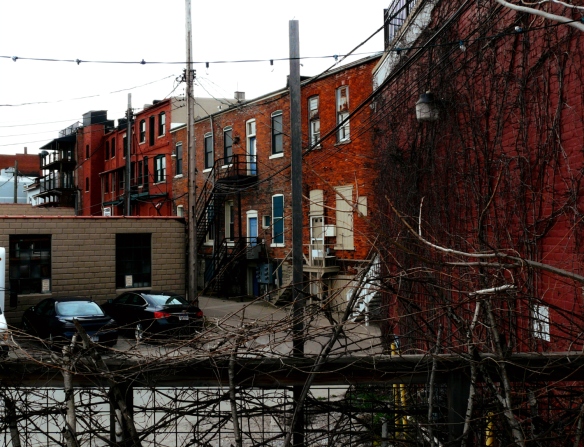 The alleyscape of the southeast block of Military and Water Streets, Port Huron (taken April 24, 2016; filtered).

The lull in posts should not be confused with an absence of work on PHAH&PA’s part.  Research is being done, pages are being added to and edited, buildings and districts are being identified as possible National Register candidates, one-on-one meetings are being held, and there’s some training going on in there too.

Part of the page additions and research has involved taking and adding photographs, so I thought I’d share some here.  Today, not realizing that the Exquisite Corpse coffee house wasn’t open on Sundays, my son and I took a little stroll around the block it’s in, looking for the little things that make up the personality of a building and a block.  Here are a few.

Old stonework and double door, Military street alley (at Water Street), Port Huron. I only wish you could really see what this photo can’t seem to convey about this historic doorway. 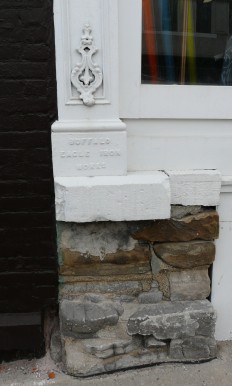 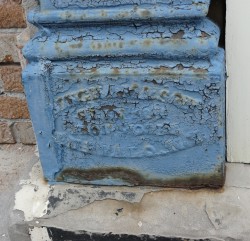 We’d need to do a rubbing of this one. Pilaster base, at the north end Military St (east side), Port Huron.

Historic interior detail (or ghost of one), east side of Military Street (south of Water), Port Huron. East Lake Builders seem to be in the process of preserving and renovating this building. 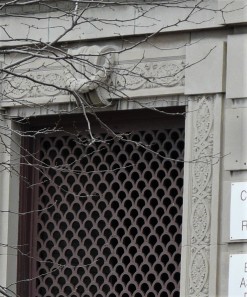 At left is an upper door detail from what’s left of the 1912 Eagles Lodge No. 343 at 1001 Military Street. It used to be a stately three story structure with brick upper floors, but now only the bottom first floor remains (it is utilized as a social services building). See below. An image of the original building will be added when one becomes available.

Below is a side view of what is probably the only red sandstone building in Port Huron, and it’s in pretty sorry shape.  This structure was one of the oldest banks in the city, St. Clair County Savings Bank.  Amazingly, it’s present location at Military and Pine streets is not it’s first–it was moved stone by stone from a location that was closer to the water (Endlich 1981:71). 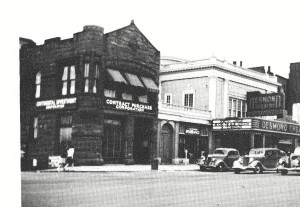 At left is a scan of the building during better days (Endlich 1981:72); the photo is undated.