Fort Gratiot and future Port Huron area of the 1825 map by O. Risdon.  The native name of the short-lived Chippewa reservation is provided here, Aumichuanaw.

I wanted to share some historic maps with you that are held by the Michigan State Libraries.  These are viewable online, so you can go to the links and see them in detail to your heart’s content.  The first two are from the extraordinary map of the surveyed areas of Michigan Territory, as published by Orange Risdon in 1825 (engraved by Rawdon, Clark & Co of Albany, New York).  Reproduced here are portions of the blue water area.  To view the entire map, held by Michigan State University, please go to its source url: https://www.lib.msu.edu/branches/map/MiJPEGS/843-c-A-1825/ 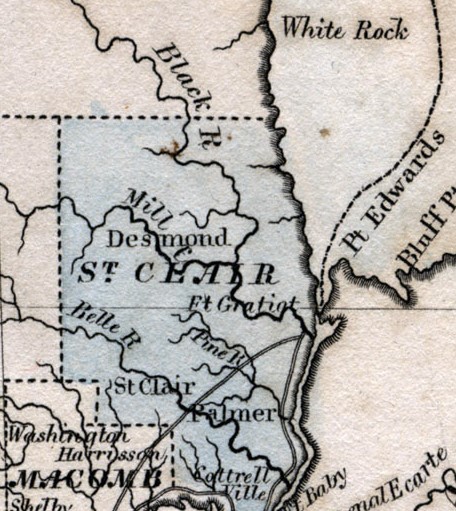 The Thumb Area portion of an 1839 map indicates the large area known as Desmond (it didn’t refer to what is now Port Huron only, but was a very large township), and Bunceville (Marysville area, just south of Port Huron’s southern boundary), which is also shown on the first 1825 map image above. https://www.lib.msu.edu/branches/map/MiJPEGS/843-E-1839-Mitchell/

Unusual locations on an unusual map:  Milwaukee and Huron, north of Fort Gratiot and within St. Clair County.  The name Milwaukee here lives on as a creek and a street at Lakeport.  https://www.lib.msu.edu/branches/map/MiJPEGS/843-A-1842-400/

1842 Young and Boynton map indicating lost name locations and a railroad line going to Palmer, north of the newer St. Clair.  St. Clair is indicated at the old fort location, and later maps place it north of Pine River (or Creek).

Other historic maps held by the MSU libraries can be viewed online as well.