When reviewing the historic resources in Port Huron that still stand, and those that don’t (along with the how, when, and why of their demise), a person can easily assume that no historic preservation laws actually exist in Michigan.  The non-federally owned properties that are protected to a certain extent here are those that people have simply wished to be protected, and, those persons had some ability to get that protection in place.  What about all the other properties that are worthy of protection, but aren’t?  What about all those that were worthy of protection in the past, but are now gone?  If protection laws exist, why have they been implemented so capriciously or subjectively, at least in the Port Huron area?

Preservation laws and ordinances are based on lots of things, like federal law and enabling laws passed by the states.  A good way to learn about them is to start at the “top” and work “down.”  Often, federal laws begat state Laws, and enabling laws stem from those  (enabling laws are those that allow the legal passage of local, instead of statewide, protective ordinances).

The National Historic Preservation Act was passed in 1966, and so just celebrated its 50th anniversary.  The reasons for establishing the law are still very valid and the threatening conditions which the law sought to mitigate are, in some states at least, still very real (the reasons for the law are reproduced at the end of this post).  This law established the National Register of Historic Places, the National Trust for Historic Preservation, the Certified Local Government Program, among other things, and defined historic resources and other legal and technical terms. Many states, if they didn’t already have a historic register, followed suit and established their own registers.

Michigan Historic Sites Register.  Michigan, while it was progressive in the past and had established a historic register (Act 10 of 1955) before the National Register existed, no longer has—practically speaking—a historic register.  Originally, it was a register and marker (plaque) program in which the site and the marker had to be approved by the Michigan Historical Commission, but a specific marker wasn’t required.  The state also had funded a bit less than half of the markers that were placed within the first 11 years of the laws existence. 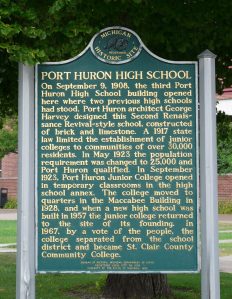 Currently, the situation is much different.  There is no official online listing of the sites listed in the state’s register.  Michigan continues to have a Historical Marker program; however, there are no state funds for the expensive markers and no current tax incentives (see that section below).  In the past, a historic site would be placed in the state register after it was approved by the Michigan Historical Commission.  Now, a historic site can be approved for the placement of an official (and very expensive) state-owned marker (state ownership officially began in 2002).  Markers cost between $1,900 and $3,900, and a site owner can’t have the application for his site reviewed unless a sizable deposit is made with the application.  Since the markers are owned by the state (though paid for privately) but not maintained with state funds, the state charges fees for repairs and maintenance and they are also high.  In comparison, a National Register site is not required to have a marker and if an owner decides they want to place one, it does not have to be approved by anyone.  Other states may have a marker program, but not require the purchase of a marker for historic site listing purposes.

Once a site is approved for the marker, the owner is required to work with an Eastern Michigan University graduate student in writing the marker text.  Only after that text is approved by the historical commission is the site included in the State Register (if it wasn’t included at some earlier time period)–even though that register doesn’t seem to exist anywhere and the state doesn’t write of it on the relevant web pages.  Please understand that the site is given a number in the State Register, but the State Register is not discussed or presented anywhere else on any official site.  It is very difficult to get a list if you ask for one (since it is not maintained at the state level), and even then, it won’t include newer sites that don’t have markers yet; so in reality, there is no state register.  (This author is still confused over how a site can receive a place in a register that is no longer maintained.)  A person can buy a $23 book (Traveling Through Time) that lists most marked sites (it’s assumed that sites that don’t have markers aren’t listed).

To sum up.  Michigan established a register in 1955 that allowed for markers that only had to be approved, not owned, by the state.  Now, state residents can’t see that register of sites even though it was made and maintained with tax dollars.  Now, persons must pay a huge fee for a marker if they want their site recognized at the state level.  If a consultant is hired, there is that cost to begin with as well.  And on top of that, there is the strange hoop of having to work with a university graduate student from a state-mandated school (if anything, this should be optional).  If the owner is also applying to the National Register of Historic Places, they are required to have their consultant (if they hired one) prepare and present a presentation to the Historical Commission, adding even more costs to recognizing a site in Michigan.

A study surveying how other states manage their historic resources should be done, but a cursory look at state programs seems to show that few states require markers in order for historic resources to be recognized.  States may have official markers available, and many seem to have matching funds for their payment, while some states simply pay for all official markers.  Washington State, which appears to  have an excellent state-level preservation program, does not require markers.

The purposes Michigan’s marker program cannot be fulfilled when only the wealthiest of site owners can participate in the program and/or when important historical sites are basically kept secret until a site owner pays for the expensive marker.  No doubt many site owners never apply to the marker program simply because the overall cost is just too high.  Such sites then, no matter how historically important they may be, never come into the public’s view.  Public historical knowledge and awareness cannot be achieved when such a subjective approach to the presentation of history is fostered and maintained.