Before winter set in, anyone who noticed the paint being removed from the bricks of the old 3-story building at the northeast corner of Huron Avenue and Quay Street may have gotten a twinge of excitement about it. Well, anyone who appreciates the warmth and human scale of old buildings, anyway. And excitement is justified, since the brick facade will be put back in its natural state and repointed. Plain windows that had replaced some of the original arched ones will be removed and arched ones re-integrated. Missing cornice (most of which is gone) will be replaced.  (The more recent and modern treatment at the first floor will remain, however.)

And that’s not all, of course, that will be repaired or retained. The smaller building connected at the north, where a Jimmy John’s now is, is part of this project also. There are four addresses here: 202, 204, 206, and 208. And Larry Jones, partner in Landmark Port Huron with Brent Marcell, proudly shared that his belief that 204-208 would be accessible via one hall someday has now come true. The (unfinished) hall in question is behind Jimmy John’s, but it will also be the rear passage for whatever store will lease the large space next door.

With renovations like this project, where the old is appreciated and married to modern conveniences and complimentary aesthetics, energy happens; the Vintage Tavern is one local example. Regarding city-wide successes, Seattle is an early and prime example, but there are many other downtown success stories in the U.S., like Fullerton, California.  As Larry shared, many have remarked to him that Port Huron could be like Holland (Michigan), or Traverse City, so why isn’t it? He and his partner are doing their best to help Port Huron transition to a vibrant pedestrian hub.  As Larry said:  if you just take your foot off, things’ll spring up.

As has been typical with rehabilitations in downtown Port Huron, the bottom floor will hold a mix of nonresidential establishments, while the 2nd and 3rd floors will be apartments. They’ll range from roomy 2-bedroom to small efficiency units (there will be 19 total). When asked about the possibility of condominiums instead, Larry said that it would be good to have ownership be a part of the residential mix downtown. The bottom floor will also hold some practical-use residential accoutrements like a laundry, and they’re hoping to include a children’s area in the basement. While most of the spaces were still maze-like with two-by-fours all over (that is, unfinished walls) when I visited, Landmark is opening up the building on April 10th for an open house. You can learn more about the project through the photos and their captions below, taken March 13th, 2018.

(Also, more details about the project can be found in this article from November 2017, Jones Lines Up Financing for 19 New Lofts.)

Let’s start with what much of the building looks like now–the “before” project shot. This is so that it can be compared to the later “after” shot.  (Unless otherwise noted, all photos taken by Vicki Priest.)

Closer view of the Quay Street facade.  This building dates from 1875.

An old Arden’s store (former tenant) sign in the hall of 208 Huron Ave.  Historically, the building is known as the Ballentine Block, as the Ballentine family built it and had a store in the bottom floor for a great many years.

This is a very large sliding metal door that will be retained in a bedroom of one of the larger units. The loading open space was closed, of course, and this will be hung to the wall.

The large back unit which will be one of the only units with a outdoor patio. Nooks were added where a infill block wall used to be. The resting door is 4 foot wide and historic, and will be used at a closet.

Historic metal ceiling tile that will be put back in place. Such metal ceilings, of all different styles throughout the building, will be saved and reapplied.

This large cable hoist is in the short stairwell that can be seen in the photo of the room above, and it is being retained. 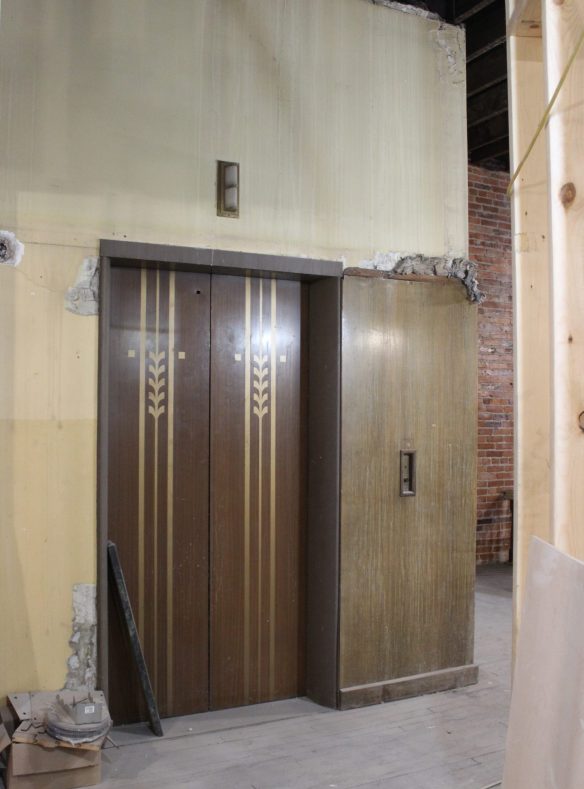 Amazingly, this old elevator, installed in 1908, will be updated and retained. 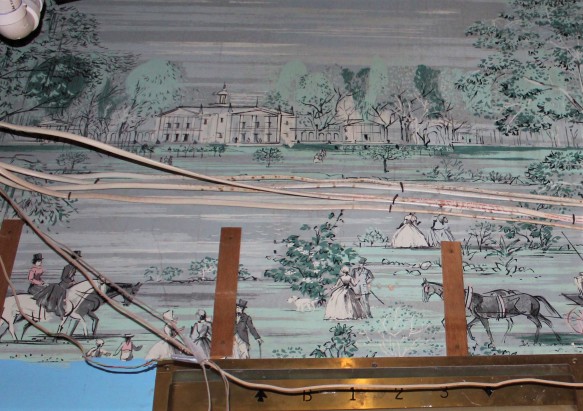 Detail of old wallpaper that still exists above the elevator at the 2nd floor.

Decorative metal that covers large beams at the third floor ceiling is being retained. 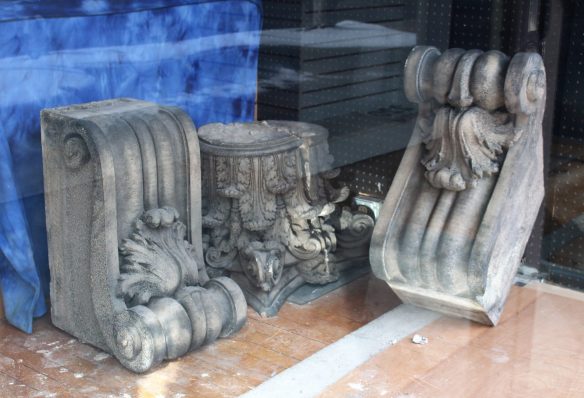 Decorative terracotta features found during work on the building will now be integrated into the exterior plans.

One efficiency unit gets this view, via three windows, of the stairwell and open area of the adjoining Vintage Tavern.

And just for fun, a sample view from the third floor–this is looking south from the Quay Street side.

View south from third floor along Quay Street, on a snowy day.

7 thoughts on “Downtown to Get Major Improvement: Rehabilitation of the Ballentine Building”