Below are some letters and other items from the William Robert Soutar collection (used by permission from Lynne Secory).  All are either written by William Jenkinson (1834-1896), or pertain to him and his family.  A brief but very telling biography of Jenkinson is included below.

William Soutar was Jenkinson’s private secretary for many years, and even served as the estate’s secretary after his employer and friend’s death (City Directories, 1893-94, page 226, and 1899-1900, page 297). Although Soutar was connected to Jenkinson in some way by 1879, as evidenced by one of the letters here, when he first appears a couple of years later in Port Huron he is a bookkeeper for Brooks & Joslyn (1883 City Directory, page 134; he is not listed in the previous 1881 directory, but that doesn’t tell us or not if he had actually moved here by then).  From the other letters in the collection, we know that Soutar was from Newport on Tay, Fife (or thereabouts), Scotland.  In a letter from his parents, dated January 31, 1880 (#2.0207), the writer answers his inquiry about the Tay Bridge Disaster (1879) and tells him that none of his friends were on the train.

The documents are provided as .png images and clickable for full, large-scale viewing.  Please give credit to PHAHPA if you use them.

“WILLIAM JENKINSON, manufacturer and dealer to pine lumber, is a native of the North of Ireland, and was born in 1834.  Upon reaching manhood, emigrated to the United States in 1853, and four years later came to Port Huron and engaged in buying white oak staves, and continued in that business for twenty years.  In 1874, he engaged in manufacturing pine lumber. He owns seven thousand acres pf pine land, and cuts from five to ten million feet annually; ships his lumber to Chicago, Buffalo, Rochester and other Eastern points.  He controls steamers and barges for freighting his lumber from the mills; he is a director and the largest stockholder in the First National Bank, and is largely interested in real estate and city property.  In 1856, Mr. Jenkinson was united in marriage to Miss Eliza M. Stettler, a native of Canada.  They have one daughter–Jennie” (History of St. Clair County, Michigan, A.T. Andreas 1883, page 577).  (Jennie later married Dr. Mortimer Willson.  It might be expected that Wm. Jenkinson’s house was built well, and no doubt it was, but it is no longer standing.)

February 18th, 1879, letter to Wm. Soutar. Envelopes in the collection from this time place him in either Sandusky, Ohio, or Saginaw, Michigan, while his home–where his wife lived–was in Rattle Run, St. Clair County, Michigan.  (#1.0074)

April 4th, 1881 letter to Soutar while in Saginaw, Michigan, with one subject seeming to address Soutar’s interest in moving to Port Huron. Since Port Huron is closer to Rattle Run, his interest in doing this would make sense. Wm Jenkinson’s simple calling card is included in this image also.  (#2.0294 and #2.0295) From San Francisco, after having visited Los Angeles. If you can decipher what Jenkinson is referring to regarding Mr. Upton, please leave a comment. Dated April 7, 1886.  (#2.0289) A short letter letting Soutar know they were leaving and stopping at some other places before their expected arrival home on April 27th. Dates April 16th, 1886. Note the change in stationery during the 9 day interval.  (#1.0060)

You probably noticed that this letter from Jenkinson isn’t to Soutar, but to the president of Grand Trunk Elevator Company. As can be seen from the company stationery, Jenkinson was the treasurer. It is included because of its probably significance related to the company and to Botsford, and perhaps the rarity of the stationery. Why Soutar kept a few of these types of correspondence is not known. Dated January 3rd, 1887. I like Jenkinson’s endnote (and not because of the misspellings), “hope you will come home as Earley in the Spring as posable–remember I know nothing about an Elevator . . .”  (#1.0181) 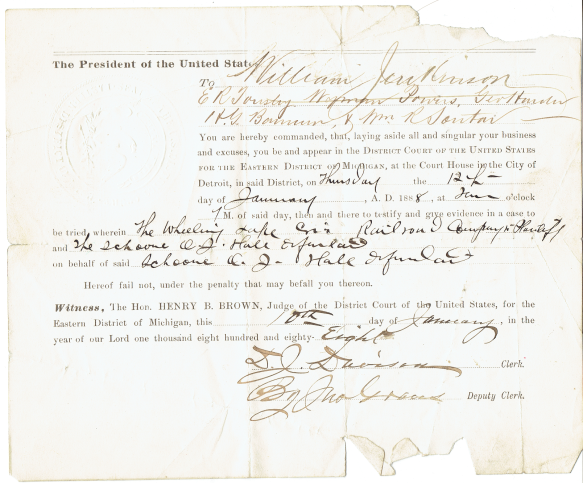 This also is not a letter to Soutar, but included for any persons interested in the companies that are parties in the court case. Please see the district court (Detroit) summons for the names. Dated January 10th, 1888.  (#2.0209) 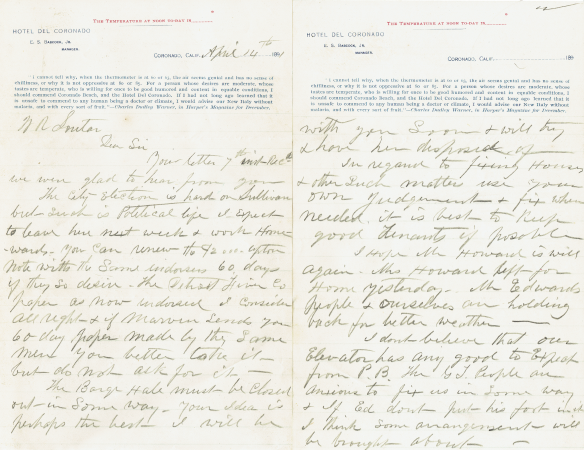 A bit longer letter with personal and business references. Note the testimonial on the hotel stationery–it’s no wonder health seekers rushed to California. This hotel is still in business, is a National Landmark, and the area is indeed nice; it must’ve been astounding when Jenkinson was there, however, without all the urban growth that now exists. Dated April 16th, 1891.  (#2.0201 and #2.0201A) Eliza wrote this personal letter to the Soutars from Scotland, but what’s wonderful about this is that she sent heather from the Soutar’s homeland in the letter and its “shadow” is visible in the paper. A fitting ending to the Jenkinson correspondence within the Soutar collection. Dated September 15th, 1892.  (#1.0109)