This article was published first at Blue Water Healthy Living, earlier in October 2018. 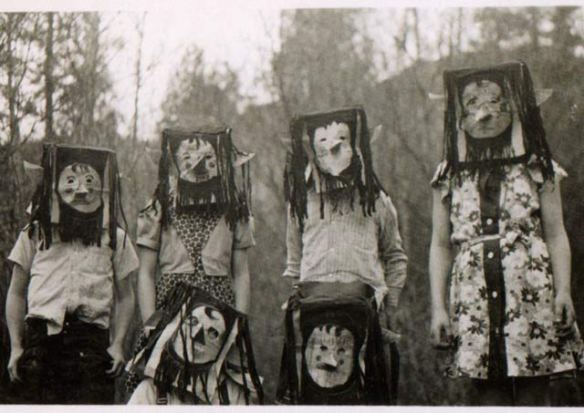 Celebrating, or having community night-time activities, on October 31st goes way back in time. It was the New Year’s Eve (Samhain) of the ancient Druidic Celts, living in what are today France and the British Isles. After the Romans conquered these areas, aspects of the feast honoring the goddess of fruits, Pomona, were incorporated into Samhain. Dunking for apples stems from the Roman tradition.

But what were the “celebrations” of the Druids? Despite what many seem to think, the Druids on this day were attempting to ward off—not worship—ghosts, evil spirits, and witches (a number of cultures believed that there were women who sold themselves to the devil, and these are referred to as witches). For whatever reason the Druids thought that on this one night of the year, October 31st, the Lord of Death allowed the departed to roam the land of the living.  And the dead could be dangerous.

Applying the “Carrot and Stick” approach to the visiting spirits

Food was set out on tables in to appease spirits, and if that didn’t work, the grotesquely-carved and hollowed-out root vegetables, lit from the inside, were sure to scare them. The carved pumpkin of today seems to come from that tradition, although why they came to be called Jack-O-Lanterns is not fully known (for the various hypotheses, see Merriam-Webster’s page on the subject).

On hilltops, giant bonfires were lit to scare the evil spirits away.  People would wear masks, sing, dance, make loud noises and tell stories around these fires. It may be that witches, if caught, would be burned in the fire. In Ireland, farmers would use their pitchforks to raise blazing hay aloft, waving it in the air with the hope of frightening witches away. (It’s interesting that our New Year’s Eve celebrations still include the making of lots of noise and filling the air with sparks.)

Time went by and the Catholic church decided that All Saints Day, originally “All Hallows Day,” was to be celebrated on November 1st (instead of May 13). The eve of All Hallows Day came to be known as Halloween. In 998, All Souls Day was added as a day of prayer on November 2nd. Now on the eve of either of these holy days, apparently, children would go around begging for “soul cakes.” In exchange for cakes the children would pray for the souls of the giver’s departed loved ones. This activity is thought to be the precursor of children going door-to-door begging for treats, although the pagan activity of wearing a costume was added.*

But what about the “tricks”? As one source (Krythe p. 216) writes: “After the spread of Christianity, enemies of the church made fun of the Christians; and on Halloween they worshiped the Devil, set skulls on pretended altars, or painted profane crosses on church walls.” In the U.S., tricks were alive and well early on. People, I’m going to assume young people, made themselves annoyances by opening (or removing) gates so that farm animals roamed free, altering street signs and house numbers, setting bonfires in streets, and, amazingly, hoisting wagons onto roofs. As if these activities weren’t bad enough, in some places Halloween “pranks” became more destructive after World War II. In response, more and more communities began to have parties and other Halloween activities for children and adults alike.

Halloween in Port Huron in the early-1900s

Port Huron was an early participant in city-wide Halloween events, having one as early as 1920. The news article about it claimed that it was an “unqualified success,” and that “it was the merriest scene ever put on in this city” (The Times Herald, Nov. 1, 1920, p. 5). A parade was held (with prizes afterwards), the Boy Scouts led a snake dance, there were acrobatic performers, and a band played until 1 am; dancing in the street proved to be very popular. The interviewed policeman expressed gratitude for the event, saying that the boys were kept busy and no property was destroyed that night.

Port Huron seemed to have needed something to stop the damage to property that was happening every year. Here are a few examples of the “Hallowe’en depredations:”

Halloween 1900: “The work of devastation indulged in by the young boys of the city Wednesday night will entail considerable financial loss. In many instances entire strips of sidewalk were torn up, windows broken and gates and horse blocks smashed. Five fires can be traced directly to the work of the boys . . . . A vacant house on Howard street was set on fire and partially destroyed and a slight blaze in the Bryce house on Howard street was extinguished before material damage was done. Several boys were locked up last night as a result of Hallowe’en depredations . . . ” (The Daily Herald, November 1, 1900, p. 1).

Halloween 1905: Oddly, the writer of The Daily Herald (Nov. 1, 1905, p. 1) article that detailed the usual “Hallowe’en depredations” actually applauded a possibly dangerous prank by saying it was the “best ever.” The lauded prank involved successfully making the conductor of a street (rail) car think that his vehicle hit and “hurt or killed” someone. The article had started out on a cheery note as well: “Pranks galore were played by Young America [on] Hallowe’en. Sidewalks were torn up, wood-sheds and other outhouses were dumped over, gates and fences were carried away and other depredations were committed.” Also, a doctor in town was driving with his wife and a small girl in the car when he hit a “horse block” that had been placed in the road.

Halloween 1917: “While chasing boys [from ‘Skinnay’s Crew’] who were getting away with an old express wagon on River street last night, Patrolman Barney Hand stepped into a hole, fell and broke two ribs. He will be off the job several days . . . . The usual number of Hallowe’en depredations were reported to the police. Windows in some sections were broken and hundreds of others ‘soaped.’ Fences and small movable buildings changed locations during the night . . . “ (The Times Herald, November 1, 1917, p. 5.

So one can see why the City and various groups in Port Huron sponsored a major event in 1920. But despite the event’s popularity, it did not continue as an annual event. Not every year was surveyed for Halloween shenanigans, but a sample from 1930 and 1940 seem to indicate that much less mayhem was happening on October 31st than in previous decades (the post WWII period was not studied). In 1930 there was very little reported to the police on that night (The Times Herald, Nov. 1, 1930, p. 1), and in 1940 there were “fewer reports of property damage than in previous years” (p. 26). The worst thing seems to have been “the meanest woman in Port Huron” dumping garbage into children’s bags after she said she’d give them pears. It was reported that schools and clubs had many events for the children and residents of the city (The Times Herald, November 1, 1940, pp. 1 and 26).

An unknown person once said, “During the day I don’t believe in ghosts. At night I’m a little more open-minded.” This Halloween, may you be free of both ghosts and pranksters.

Goofy pumpkins (by annca at Pixabay).

* For more on the possible antecedents of trick-or-treating, see History of Trick-or-Treating. This article was not used more for this article, however, since sources and many dates were not provided.