Many people seem to know of the small concrete Ken-Way homes in Port Huron, but that they were a very local and very short-lived phenomenon seems less widely known.  Ken-Way, or sometimes just “Kenway,” homes were developed by Kenneth Wyillie of Port Huron.  They were made by assembling locally constructed pre-cast walls–which included insulation, wiring, and plumbing–at the house site (the foundation and roof were not pre-cast).  The homes were built from about 1950 to 1957.  These years are representative of articles or ads found regarding new Ken-Way homes in the local newspaper, but some homes may have been built shortly before or after.

An article from November 1951 (The Times Herald, page 5) reported that “several of the modernistic, flat-roofed buildings already have been erected in the Port Huron area.”  A 1950 ad states that they had built a “test home” five years prior.(1)  It can be assumed–perhaps wrongly–that the address of the home they provide in the ad is that “test home.”  Whether it is the 1945 test or another early example, it is still standing and shown below the pictured ad.

2573 Robbins Court, Port Huron–the house mentioned in the above ad. If this is the Ken-Way test home, it was built in 1945 (author photo, 06-04-19).  It is unknown at this time if the hip roof was added later.  The front door is around the right corner.

An ad from September 1955 states that “over 120 Ken-Way Homes” had been built in the area.  While preliminary research has not divulged why Ken-Way homes were built only for such a short time, it seems that an impetus for their development was the Housing Act of 1950 (Public Law 81-475, which amended the VA Home Loan Guaranty Program of 1944 and 1945).  Now, veterans or their widows could more easily purchase a home with the government’s backing, and one that met minimum construction standards.  Ken Wyllie, having experience in the building trades (2), saw the opportunity to sell low-cost housing via the Housing Act.(3)  This can be seen in his ads and news articles, which include statements such as:

“The current two-bedroom model is to retail for $5,375.  This means that a non-veteran buyer, owning a lot, would be able to have one of the houses erected and financed through the FHA with an initial investment of less than $1000.  For veterans, the first cost would be considerably lower. . . .  So with full realization that seeing is believing, we invite the general public, especially GI’s, to take a look at our little [model] home . . . ” (4)  and, “GI’s You’ll Look Far To Beat This Value!” (5)

As one might imagine, Kenneth Wyllie was not the only person in the country to see the possibilities of the Housing Act.  National Homes Corporation of New York advertised their “National Thrift Home” and others in 1950.  Their ad showed four homes and stated that “15 floor plans offer you 94 variations in designs!”  The prefabricated homes were available in 500 cities.(6)  Of course, there was already a long tradition in America of buying “kit,” “ready-cut,” or mail-order homes, with Sears, Montgomery Wards, Aladdin, Ready Built, and others doing such business for decades.

But why the quick demise of the Ken-Way home?  Marketing did not seem to be the problem.  Ken-Way Homes seems to have been good at it, as it even had a “Ken-Way Korner” segment on the radio.(7)  Perhaps it was the style?  The modern style with flat roofs was not favored by everyone (8); however, they were soon built with a choice of roof styles.  They are very low to the ground, yet many exist today in very nice form.  One was found so far that has a second floor addition, so they must be structurally sound.  Further research is needed, and comments are welcomed.  Considering that mail-order homes no doubt always provided stiff competition, perhaps labor costs proved to be too much in the long-run.

Indicative of this possibility is a workers’ strike in 1953.  Port Huron Building and Construction Trades Council members picketed the manufacturing location of Ken-Way Homes, 2009 Petit Street, and Wyllie had sought an injunction to prevent the picketing.  In refusing Wyllie’s request Judge Kane found, in part, “that wages paid were vastly below the union minimum scale and were equally below the minimum standard for its members in relationship to benefits over time.” (9)  In the spring of the next year, 1954, an ad announced a future 5% increase in house prices. (10)

Below are photos of a small number of Ken-Way homes as they appear today.  It is noted in the captions if there appear to be more in specific neighborhoods.

2204 Hancock, Port Huron. While this home had not yet been found listed in a historic newspaper, it is most certainly a Ken-Way house (author photo May 30, 2019).  This neighborhood, north of the east-bound entrance to the Blue Water Bridge, seems to have many Ken-Way homes and the next three are from that area.

2417 18th Avenue, Port Huron. This home is assumed to be a Ken-Way by visual identification. Though it may be hard to see in the photo, it has the distinct door wall that juts out from the other wall (author photo, May 30, 2019).

2323 18th Avenue, Port Huron. This home is identified as Ken-Way via a 1957 newspaper ad. Note the jutting front wall. The house appears to have a back addition as well as a newer second story (author photo May 30, 2019). 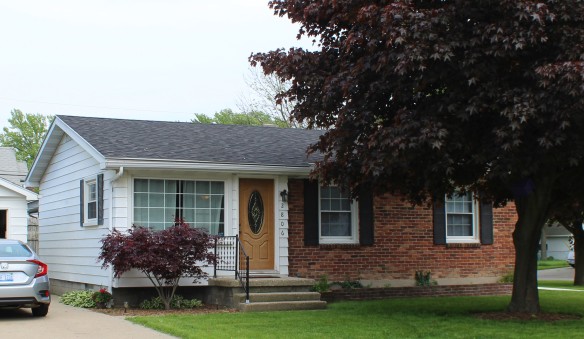 2806 17th Avenue, Port Huron. This home has the distinctive jutting front wall (the wall the the right of the door is set back a short distance) (author photo, June 4, 2019). 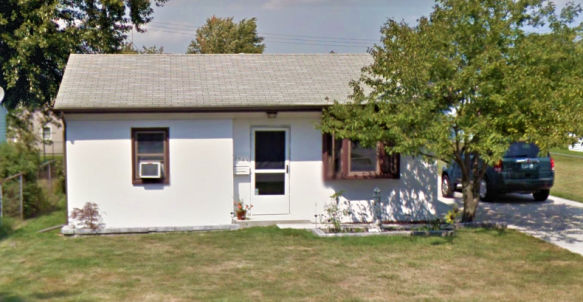 2543 Spruce Street, Port Huron (if Google street view is not mistaken). The home directly across the street looks to be the same model as this one. This home was advertised as a modified Ken-Way for re-sale in 1958 (Google street view image from 2013).  Note the left jutting wall.

Further research and a historical buildings survey of the neighborhoods could possibly identify most Ken-Way homes.

* Cite author and web source when using this article for research and/or quoting.  For significant use of the research information used in the article, contact the author via porthuronhistory@gmail.com for permission.

(2) A 1946 ad for Home Roofing & Siding Co. shows Wyllie as manager (The Times Herald, Feb. 23, page 7).  An ad-type of “article” from that same year boasts that he had 12 years experience in building, roofing, siding, and insulation (The Times Herald, Jan. 7, 1946, page 7).  In what seems a reverse foreshadowing, the article says he’s a “man with a past,” with the article using a twist of the normally negative expression to introduce his good past.  However, Wyllie soon acted in ways to give him a negative reputation. In 1947 he punched a Union representative in the face 2 or 3 times, breaking his nose.  Charges were not filed at first, but 2 years later Wyllie was found guilty of assault and his victim, Wesley Kercher, was awarded damages (The Times Herald, June 9, 1947, page 1, and other articles from that year, and Dec. 17, 1949, page 2).  Another lawsuit was filed against Wyllie in 1949, the plaintiffs claiming that they purchased the timber rights to a property that Wyllie owned, but that Wyllie sold the property before they removed the timber.  The suit was settled out of court (The Times Herald, Sept. 17, 1949, page 5).  Wyllie was in trouble yet again when, having not paid the damages from the Kercher suit, he was arrested in 1950 (The Times Herald, May 4, page 2).