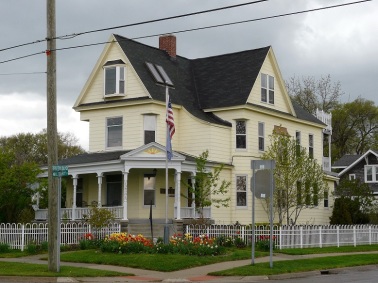 3803 Electric Avenue, known as the Conner House. It is one of the earliest South Park homes and was depicted in a Factory Land Company booklet (ca 1902). George Conner was an industrial inventor and promoter of important South Park companies. A street in South Park is also named after him.

With the preliminary questionnaire accepted by a Michigan State Historic Preservation Officer, further study and considerations of boundaries for the South Park Historic District are moving forward.  To show our progress, an excerpt from the preliminary questionnaire is given below (the formatting was changed because of website conditions, however).  It is a concise consideration of the early period of the district.

A Concise History of South Park: Beginnings and Early Development

What is known as South Park, at the south end of the City of Port Huron, began in 1901[1] as a planned community that had minor similarities to a company town.  Unlike any other turn-of-the-century neighborhood or town known in the region, South Park was designed with a long (east-west) central park which was to be surrounded by homes, while the community’s north end was reserved for commercial enterprises and industrial plants.  Employees could buy lots (sometimes with houses already built on them) directly from The Factory Land Company, the owner and promoter, with easy terms.  And aside from some minor stipulations,[2] research so far suggests that neither the Factory Land Company or any associated company controlled residents or owned commercial businesses in the manner that traditional company town developers did.