Fort Gratiot Township was organized as a township in the year 1866, with H. Stevens as the first Supervisor.  It is situated in the eastern part of the County, at the foot of Lake Huron.  It is a fractional township, and is designated Town 7 north, Range 17 east; it is bounded on the north by Burtchville, east by Lake Huron and St. Clair River, south by the city of Port Huron and Port Huron Township, and west by Clyde Township.  The surface of the country is mostly level, with some marsh land, and was originally timbered with pine and hemlock.  The soil is of a sandy nature, producing wheat, oats, hay, potatoes, and corn.  It is traversed by the Black River in the southwestern part.  T. Lymburner is the present Supervisor; and the population numbers one thousand three hundred and sixty-one. END_OF_DOCUMENT_TOKEN_TO_BE_REPLACED

In the year 1819, when the Hon. D. B. Harrington came to this place to make it his abiding place, nothing but a vast wilderness met the eye on every side.  The Chippewa tribe of Indians were the occupants of this region; and during the fishing and hunting season they congregated at the mouth of the Black River in large numbers; and their huts and wigwams dotted the shores for a long distance north and south.  There were at this time a few French families scattered around, whose names are mentioned in the early history of the County, and who at times were seriously annoyed by the Indians.  The propensity to steal was largely developed among them. END_OF_DOCUMENT_TOKEN_TO_BE_REPLACED

After spending some time researching people from the past, it would be hard not to notice how some people are remembered fondly at passing, and others not so much. Some well-known people in the community get their obligatory obituaries, tersely written, while others get a long and detailed one, splashed with kind words and compliments; and, memorials besides the obituary are found.* 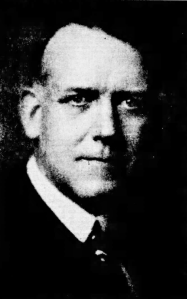 A case in point is that of Stanley McFarland, 1879-1940. One could say he was a beautiful man who led a beautiful life; I say that he appears to have been a rare, super-fine human being. The following information is from his obituary in The Times Herald (February 24, 1940, pages 1 and 5). Following that, two memorials that anyone would be proud of are quoted in full; please read them to learn more about this example of a man.

Stanley was 60 when he died, having been laid low by a virulent infection that had started in his ear; apparently surgery made it worse. He had come to live in old Fort Gratiot as a boy when his parents, John and Catherine McFarland, moved here from Ontario (Port Hope), Canada. He grew to be 6’4” and was an “outstanding” athlete, being “an exceptionally good tennis player.” He was a director of the YMCA for some years. Stanley was known for an extraordinary mathematical ability, where “he could add large columns of figures in his head more rapidly than other clerks could do by using the adding machines. His answers to mathematical problems were always found to be accurate.” But he wasn’t just brilliant at adding numbers. He was highly regarded for his ability to analyze whole and difficult financial reports and regurgitating them in an easily understood way to others. He seemed pretty brilliant and inquisitive in general, as he traveled by car throughout the country, delighting in learning all about different areas. END_OF_DOCUMENT_TOKEN_TO_BE_REPLACED

The lack of recent posts hasn’t reflected the amount of work being done, only sleepy eyes and a discrimination over what to make public at any given time.  But this is fun and there are no clients for it presently (hey, if you want to donate toward my unpaid work, my bills would place you on a pedestal!).  Through word-of-mouth, a couple of properties were brought to my attention that are interesting–not simply because the still-standing homes are old, but because they are old AND still have descendants from the first land owners living in them.  Now, that’s something.[1]  If you know of any of these types of historic resources, please comment or contact me through a contact box here or via email (phahpa@zoho.com) for inventory and future study purposes.